The Ice Age Trail 50K.  I love this race.  I will run it every year for as long as I can.  Of course, the best part of this race is all of the lovely people who are there.

I woke up at 5am race morning, got ready, drove to the race, parked, changed into my shoes and wandered off to put my drop bag in its proper location.  I glanced at my phone and saw that it was 7:20am.  50 mile runners were coming through the start/finish area and Thom told me that he was going to pass through at exactly 7:23am, so I went to look for him.  I was standing there for approximately 2 minutes when I saw him and Jason come running up.  I yelled and waved and cheered and got two quick, sweaty hugs from them both.    Thom took off toward the next section, but Jason took a longer stop at his drop bag.  I promptly yelled at him about going out too fast.  "What are you doing running with Thom?!  He's on a 7:45 finish pace."  Yeah, nice to meet you too, Mandy.  I'm not good at this introduction thing.  Whoops.

After the boys were gone, I went to pick up my packet.  I ran into Tom (not Thom) and gave him a hug.  We ended up sharing the first mile of the race together.  I can't say enough nice things about him!  I'm disappointed he got tired of the Wisconsin winters and moved to Arizona.

To start off the day, the race director climbed up onto a ladder and made a few pre-race announcements.  Myself and about half of us were still off the side of the starting line behind the small crowd.  He said that we would start in 5.  And suddenly he began counting down 5 - 4 - 3 - 2 -1...WHOOPS, 5 seconds, not 5 minutes...we were starting!  I laughed and dodged through some people and made my way across the starting mat.  This is how we roll in Wisconsin, folks. 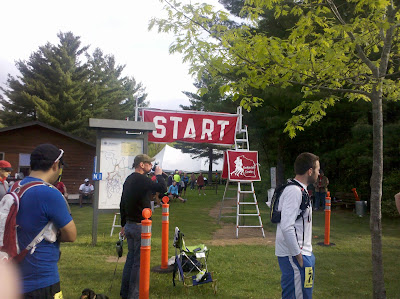 I was going into this race as a celebration of my first full year of ultra running.  It was just supposed to be a training run; the last long run I would do before the Kettle Moraine 100K in three weeks.  However, I had a secret desire to PR.  I ran a 7:07 last year with poorly managed aid stations.  I should have come in under 7 hours last year and I desperately wanted to do it this year.  However, I wasn't supposed to do that.  I was supposed to run this easy.  But my brain wouldn't let it go.  And when we started, I took off.  I'm normally a back of the pack kind of girl, but I stayed with the pack.  I ran with a group of people.  I ran like I was just out for a normal day-to-day run.  Yes, I went out too fast.  I'm normally a very conservative runner, but I threw caution into the wind and just ran.  I ran up hills that I would normally walk.  I let myself bomb down the hills.  I smiled.  I had fun.  I thanked all the volunteers and waved to everyone. I went out too fast.

As I was coming through the start/finish area to start my first loop, I heard someone call my name.  It was Thom and he was resting comfortably in a chair on the sidelines.  I stopped dead in my tracks -- he was supposed to be on his way to a 50M PR.  "WHAT ARE YOU DOING?" I yelled.  He yelled back something about his ankle.  I was still stopped in the middle of the trail.  I said, "WHAT THE HELL HAPPENED?"  The crowd chuckled.  Damn ankle.  Sorry, Thom.

I grabbed some more gels from my drop bag, took a quick bathroom stop and was on my way for the first loop on the Nordic ski trails.  I hate the Nordic loop.  You leave the beautiful singletrack of the Ice Age Trail and get thrown on hilly, rocky double track.  Some parts are nice and flat and runnable, but the backside of the loop is just hill after hill after hill.  They are short, steep and relentless.  It's impossible to find a rhythm.  You go up and come back down and immediately go back up again.  Fly down...walk up...fly down...walk up.  But that's the first loop.  That description changes on the second loop.

I made through the hilly section of this loop, drank a bunch of coke from the aid station, and promptly fell apart a mile or two later.  20 miles down and I was toast.  My legs turned into lead.  My quads said, "Uh, lady, just what are we doing?  We're sore.  You made us run 50 miles less than a month ago.  It's warm outside today.  You haven't taken in enough salt.  Sorry, but we're shutting down now."  I walked through one of the most runnable sections of the course.  I felt like shit.  I contemplated taking a DNF.  I was hot, I was tired, and 22 miles seemed like a nice, long run.  But I needed to make it back to the start/finish area first.  So I walked.  And a nice man came running up from behind and started chatting with me.  His brother was out running the 50 miler and he was just out running for fun, talking to other racers.  He asked me how I was feeling.  I said, "Oh, you know, okay.  I've been better."  We jogged together for a few minutes.  It was then I saw Thom and Katie sitting on the top of a hill.  They asked me how I was doing.  "I feel like SHHHHHIIIITTTTT," I yelled up to them.  I think the gentleman running with me at the time laughed as my answer to them was a bit different than the answer I gave him.  I asked them what it felt like to cramp.  "I think I might be cramping?!"  I had never dealt with cramps before. They urged me to get more salt and to walk.

I came through 22 miles in 4:54.  Ouch.  I was quickly losing my cushion.  I threw my sub-7 goal out the window and decided that I would take a longer break at the main aid station.  It became just about finishing and getting this race done with.  My friend Deana was waiting for me as I came through.  I sent her off to find me some S! Caps if possible, but no luck.  I did my first ever shoe change during a race.  I took another bathroom break.  I lingered at the food table.  I chatted with Deana's youngest daughter.  Okay, okay, I guess it's time to get back out on the trail.  I left with 5:02 ticking off on my watch.  2 hours and 5 minutes to get a PR.

I am not ashamed to say that I ran with my iPod on for the last loop.  I leap frogged off and on with a nice man named Matt.  I ran when I could.  (I actually clicked off an 11:40mm somewhere in here.)  I walked when I couldn't run.  The hilly section became ouch, ouch, gingerly pick your way down...walk up...pick your way down...walk up.  My legs were sore.  My quads were screaming at me.  I ran as best as I could.  My breathing was fine and I could still run at a 10:XX minute mile pace, but holy crap that hurt when I did.  But I ran and I soldiered on.  The last aid station comes with 1.5 miles left in the race.  I just flew on by.  I didn't slow down or even look at the aid station.  Screw that crap.  Just get me to the damn finish line.

With maybe about a mile left to go, I heard someone call my name from behind me.  Jason?  Jason!  We timed that perfectly.  We joked about it happening, but I never could have dreamed that we would have actually done it.  He was running the 50 and we thought that our times might coordinate enough that we could run that last mile in together.  Amazing how these things work out.  His adorable son was pacing him for the last few miles.  I could tell he wasn't feeling well and was hungry to be done.  He was a mad man on a mission.  I felt that way at the end of my 50 too.  Soon we came up upon Thom and Katie on the top of that same hill again.  Katie ran with us for a few minutes and then we heard the finish line.  I told Jason to sprint it in, and he took off.  I took off just behind him.  Sprint, baby, sprint!  I was ready to finish and have another ultra completed.  Last year I had tears in my eyes.  This year my quads were yelling obscenities in my head.  Oh well.

I crossed the line somewhere around 7:10.  3 minutes slower than my PR and 11 minutes off my goal.  For crashing and burning, I'll take it.

The gang hung around for a while afterwards.  We drank beer, ate, joked around, took pictures, and chatted with various fellow racers.  Some of Jason's Ohio crew gave me a sample of almond butter after it came up in conversation.  Got to talk for a few minutes with Shaun Pope.  It was a fun afternoon and I know I say it after every race, but ultra runners really are just a spectacular group of people. 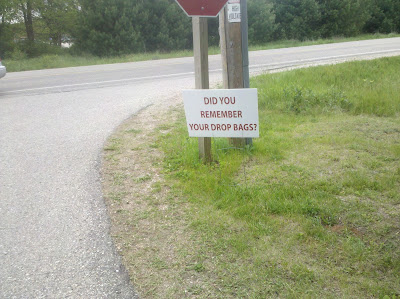 The best sign ever.  Because I have actually forgotten my drop bags before.